Started the day off with breakfast! The lady we stayed with put everything in a tray and it was so cute! Inside was bread, butter, fruits, cheese, and strangely a few containers of sprinkles. One thing I forgot to mention was about the staircases and bathrooms in Amsterdam (or at least where we stayed). The stairs were so tiny and steep that going up and down was such a challenge. The width of the steps was about half the length of my feet so I had to walk sideways when I go up and down. The bathroom is also super small and when I sit on the toilet, my knees are just a few inches away from the wall. 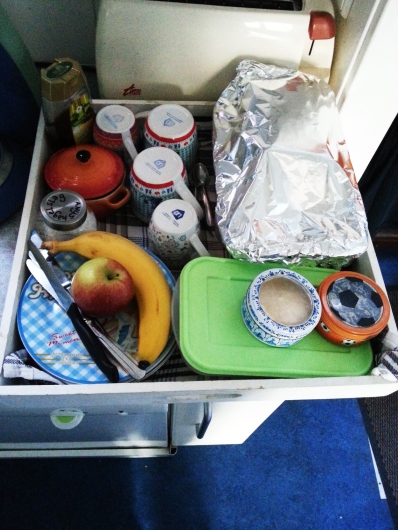 Afterwards, we took the train to Amsterdam Centraal again and to a rooftop bar/restaurant, SkyLounge Amsterdam, for some coffee (except I got hot chocolate instead).

I’ve heard that they always serve your drinks with some biscuits here.

Once recharged from caffeine, we walked around near the train station and decided to go on a canal tour, which was about an hour long. 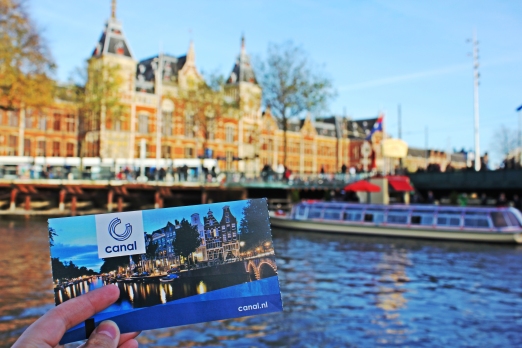 One of our friends, Jay, is quite a coffee drinker so after the canal tour we went to the Van Gogh Cafe for some coffee. Another thing I noticed is that some places in Europe we have to pay for the bathroom! Often times I am too desperate and pay up to use it.

It was already around 4pm and we hurried to the Anne Frank Museum. When we got there though the line was out the door and around the corner. The museum closes at 5:30pm and we figured by the time we get in it’s around closing time. So, we gave up on that and headed to the Pancake Bakery to eat! It was the best decision to come here! Everything was so good! We got one sweet and one savory pancake. What was cool about the restaurant was that they had free postcards outside their bathrooms! But the floor in the restaurant was super slipper though.

After dinner we went to the Tulip Museum and the Cheese Museum that was next door to it. The Tulip Museum looked liked a gift shop and everything was super cute. Right next to the register was the entrance of the museum, which there was a fee for. Once we walked through, there was a beautiful background of a field of tulips and a TV looping a video about tulips.

Since the Cheese Museum was conveniently next door we went there after. Once we walked it the strong aroma of cheese went through our noses. There were samples everywhere and there were so many choices of cheese! It was like cheese heaven! Of the ones I sampled, my favorite was the pesto cheese and I got a slice to bring back with me. Downstairs of the shop was the actual museum. And at the end there was a photobooth where you can take pictures with cheese (fake ones of course). For the rest of the night, we spent it at the Red Light District again and before the night ended we had to relive Joselito Tapas Bar.